Santosh Satam is the driving force behind SecurBay. He is an information security evangelist, backed up by multi-disciplinary skills in areas of Software Product Engineering, Technology Management and Enterprise Risk Assessment.

Santosh has 20 plus years experience in working across multiple geographies (USA, Middle East, India) with leading financial institutions such as Standard Chartered Bank in the Middle East and HDFC Bank in India. He has also worked for leading technology companies such as Digite Inc. (USA), CTIS Inc. (USA) and Opus Software Solutions (India). In his previous role as a Practice Head with one of the largest, pure play Information Security Company in India, he provided expertise in Information Security to Multinational Corporations, Financial Institutions, Telco, Government Agencies, and IT Product/Services Companies. He holds several information security certifications including CISA, CISM, CISSP, and CSSLP, ISO 27001 Lead Auditor and COBIT5 (Foundation).

Santosh is an industry acclaimed speaker and has spoken at various security conferences such as ISACA and c0c0n in India and abroad, on varied topics relating to security – such as Web Application Security, Mobile Security and Secure SDLC. He has conducted several workshops on Application Security for the ISACA Mumbai Chapter.

He has a Master’s Degree in International Banking and Finance from University of Mumbai and his other interests include long distance running and has been participating in Marathons since 2006. 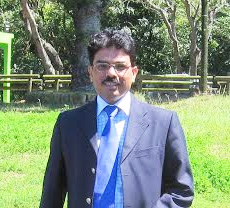 Santosh Satam is the force behind SecurBay. He is an information security evangelist, backed up by has multi-disciplinary skills in the areas of Software Product Engineering, Technology Management and Enterprise Risk Assessment.